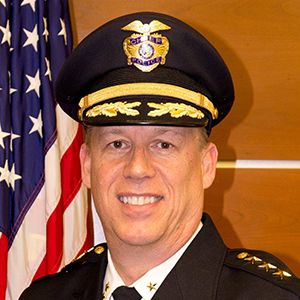 Steven Casstevens is the Chief of Police with the Buffalo Grove, IL Police Department. He began his law enforcement career in the Military Police with the U.S. Army’s 101st Airborne Division from 1976-1979, and is a graduate of the 51st class of Northwestern University’s School of Police Staff & Command (1991), the Executive Management Program, and the 216th session of the FBI National Academy (2004). Chief Casstevens serves as the Third Vice President of the International Association of Chiefs of Police and an adjunct instructor for Northwestern University. In addition, he has authored numerous articles for Police Chief Magazine, Command Magazine, and Law and Order. In 2017, Chief Casstevens received the Lifetime Achievement of Excellence in Law Enforcement Award by the Illinois State Crime Commission/Police Athletic League of Illinois.

Chief Casstevens has been a valuable member of Fight Crime: Invest in Kids. For seven years, he has championed key investments in children through newspaper opinion pieces, meetings with Illinois policy-makers, and speeches to early childhood organizations.