In the early 1990s, crime was at a historic high. The “tough on crime” movement rose in response, and the nation saw expanded mandatory minimums, three-strikes, and zero-tolerance laws. Youth were a particular focus, with gang violence plaguing most major cities. 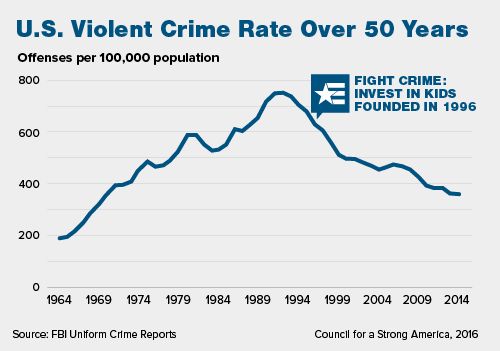 It was in the wake of these troubling trends that a small team of influential law enforcement leaders asked a seemingly simple question: What would it take to prevent crime in the first place?

This group included current and former NYPD commissioners, Elliot Richardson (U.S. Attorney General under President Nixon) and other concerned police chiefs, sheriffs, district attorneys, and crime survivors from around the country. In 1996, they launched Fight Crime: Invest in Kids, a national group of law enforcement leaders who would work to prevent crime by helping at-risk children succeed in life.

Law enforcement leaders had a new message. Would people listen?

Within months, Fight Crime: Invest in Kids acquired a small amount of funding to look at the crime prevention research. The results were conclusive: Rigorous trials were demonstrating that programs including preschool, voluntary home visiting, and family-based therapy for juveniles could cut future crime by as much as 50 percent.

Around the same time, Fight Crime: Invest in Kids commissioned the Center for Criminal Justice Policy Research at Northeastern University to survey the nation’s law enforcement leaders. The response was telling: 9 out of 10 police chiefs agreed that “America could sharply reduce crime if government invested more in programs to help children and youth get a good start.”

They were also three times more likely to say “increasing investments in programs that help children and youth get a good start” was the most effective long-term crime-fighting approach, compared to “trying more juveniles as adults” or even “hiring additional police officers”. 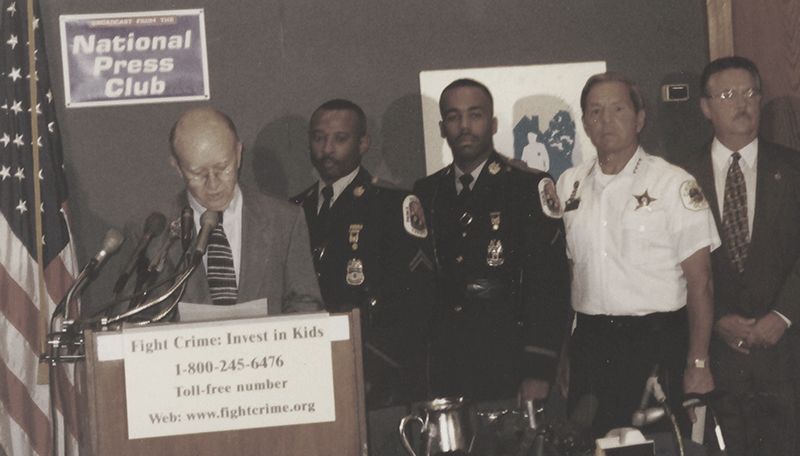 In July 1996, Fight Crime: Invest in Kids held its first event to publicize the results of the survey. The former leaders of the NYPD and Chicago Police Department spoke at the National Press Club in Washington, D.C.

In 1997, Fight Crime: Invest in Kids weighed in on a different issue: after-school programming. Joining with the U.S. Attorney General, Fight Crime: Invest in Kids members released a report called The Prime Time for Juvenile Crime, showing that juvenile crime peaked during the after-school hours, and debunking the popular notion that the peak hours of crime took place at night.

Media nationwide picked up the story, reaching more than 25 million Americans. The connection between crime and the after-school hours was fresh in people’s minds when lawmakers established the 21st Century Community Learning Center (CCLC) program in 1998―the first major federal investment in after-school programs.

They were onto something.

A new model of advocacy

Since those early victories, Fight Crime: Invest in Kids has influenced state and federal policies around issues ranging from early education to voluntary home visiting to juvenile justice.

However, along the way, Fight Crime: Invest in Kids’ members and staff realized that law enforcement wasn’t the only sector affected by young people’s trajectories in life. In 2006, they formed the nonpartisan nonprofit Council for a Strong America in order to create a launching pad for other organizations of American leaders who care about the next generation’s ability to become productive members of society.

Today, over 10,000 American leaders are organized around a common cause: ensuring that the next generation is prepared to live healthy, crime-free, and productive lives.

These leaders know that investing early on in children’s futures will create a stronger nation in the years to come.