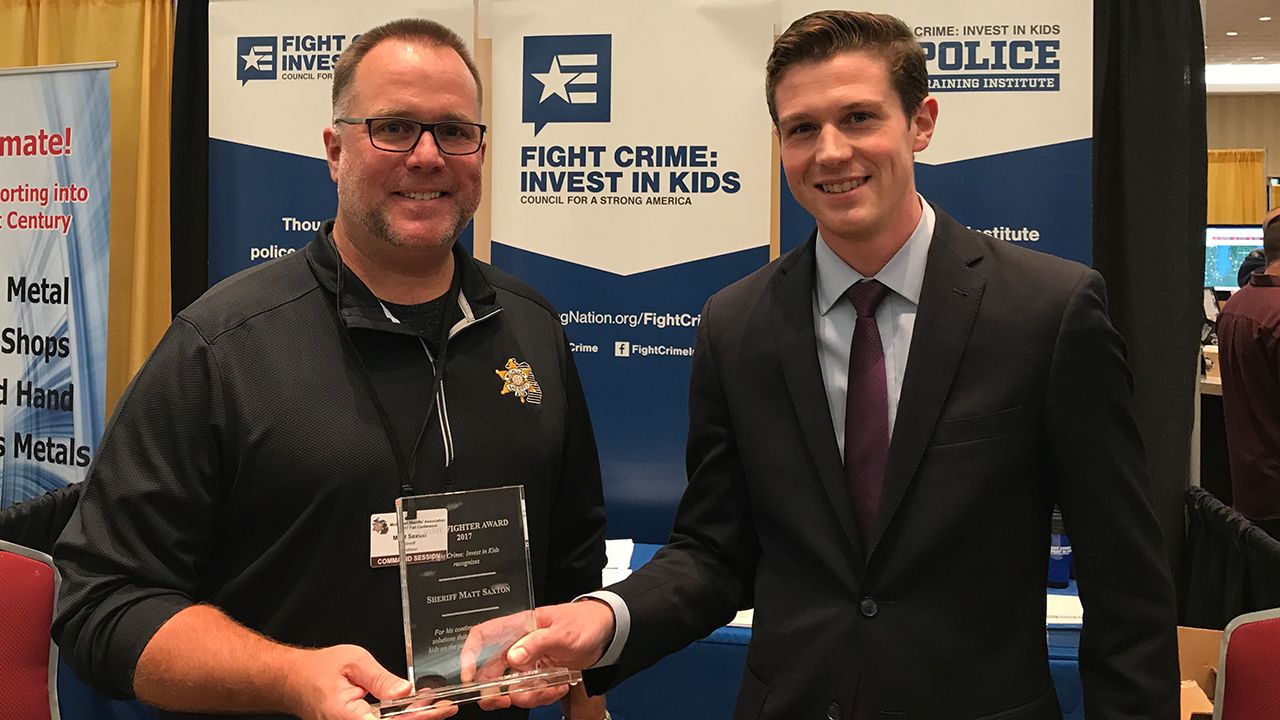 We have nearly 300 outstanding Fight Crime: Invest in Kids members in Michigan. Each year, we face the difficult task of honoring just one one of these dedicated law enforcement leaders that went above and beyond to cut crime and build public safety in Michigan.

Since becoming Sheriff 5 years ago, Sheriff Matt Saxton has showed us again and again that he understands how important it is to make quality investments in kids so that they do not get themselves into trouble and can go on to lead successful lives. His ongoing commitment to kids in his community is why he is this year’s recipient of the 2017 Crime Fighter Award in Michigan.

As a member of Fight Crime: Invest in Kids, Sheriff Saxton has participated in meetings with legislators, signed-on to multiple letters of support to state and federal policymakers and been a trusted resource in our work to promote solutions to keep kids out of trouble. Whether it be talking about the need for community-based alternatives to juvenile incarceration or the importance of voluntary parent-coaching programs, Sheriff Saxton knows what is at stake and never shies away from raising his voice to help at-risk youth.

It is no surprise that Sheriff Saxton is such a strong member of Fight Crime: Invest In Kids – he has a clear passion for helping to lift up as many kids as possible and to give them the tools to be successful in life.

Since taking office, Sheriff Saxton makes time every year to visit and talk to every 4th grade class in the county where he shares with students the six “s”s for success that are part of the “(6S) Success for Students” program. These are: safe, secure, strong, smart, study and strive. He makes sure that they know how important it is to stay in school, work hard and to be successful by being the best student that they can be.

Sheriff Saxton does not ask these students to be the fastest or the strongest or the smartest, Instead, he asks that no matter what path they go down in life, that these students be the best citizens that they can be; that if they put the effort in, they will succeed. He also talks about some of the trials they might face as they get older, such as peer pressure, alcohol and bullying.

As he wraps up his talk, the Sheriff administers the “Junior Deputy Oath for Student Success (6S)” in which each student pledges to be their best self. They each get a signed copy of the oath with their name on it and the “Student Success” book. The price of the books for every 4th grade student for two years costs the same as it does to lodge one inmate for a whole year. The way Sheriff Saxton sees it, if he helps just one kid succeed, it is worth it. Sheriff Saxton is often asked why he personally goes and talks to each class and makes sure that there is funding for this. His response? “I believe that it is my duty as Sheriff.”

We are honored to present Sheriff Saxton with the 2017 Michigan Crime Fighter Award.