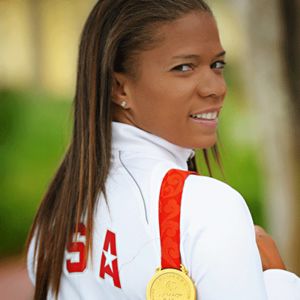 Raised with a hard work ethic that she has honed with a will of steel, April Holmes has redefined what it means to be disabled. April was involved in a train accident in 2001 that resulted in the loss of her left leg below the knee. While she lay in her hospital bed, a doctor told her about the Paralympic Games, and three goals were firmly implanted in her mind: She wanted to wear the USA uniform, break world records, and win gold medals.

Since her career in Paralympic track & field began in 2002, Holmes has continued to succeed: She has broken Harvey IPC World Records 14 times and American Records 18 times in the 100, 200, 400 meters and the long jump. Over her astonishing career, April has put together several undefeated seasons, and won her first Paralympic gold medal in the 100 meters at the 2008 Beijing Games. April put on the USA uniform again at the 2012 Paralympics in London. After a photo finish, she was awarded the bronze medal in the 100 meters in front of a sold-out arena. April competed for Team USA at the 2016 Summer Olympic Games in Rio.

Off the track, she runs the April Holmes Foundation, a nonprofit organization assisting people with physical and learning disabilities with scholarships and medical equipment. Holmes uses her MBA in Marketing to improve the awareness of people with disabilities. Holmes was recently named by the International Paralympic Committee’s “Top 10 Women in Paralympic Sport.