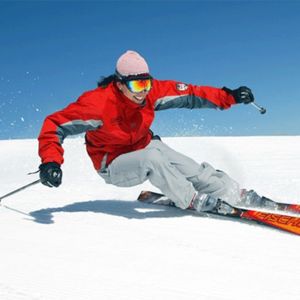 Carrie Sheinberg grew up in Port Washington, NY, where each year the snow was just deep enough to ski in her backyard. Sheinberg’s first ski trip at the age of two led to racing at seven, and attendance at a full-time ski-racing high school in Stratton, VT. She was named to the US Ski Team in 1990 at the age of 17 and made the Olympic team in 1994, where she was the top American finisher in the slalom in Lillehammer, Norway. Sheinberg went on to win three U.S. national titles, including the 1995 and 1997 overall crowns and the 1997 Giant Slalom championship, before retiring in 1998.

After retiring from ski racing, Sheinberg attended the University of Utah in Salt Lake City and worked as a reporter for the Salt Lake Tribune covering outdoor and Olympic sports. After a two-year stint as a producer at ESPN Radio, she worked as a reporter for SiriusXM Radio and a freelance journalist who has been published in ESPN the Magazine, SKI, Outside and The Boston Globe. She also covered the Olympics in Salt Lake City, Athens, and Torino as well as the 2005 Tour de France.