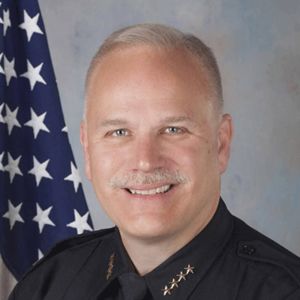 Chris Magnus joined the Tucson Police Department as Chief of Police in 2016. Previously, he served as the Chief of Police in Richmond, CA for nine years, where he had been significantly involved in strengthening ties between the community and its police force–addressing historically high levels of crime, and implementing reforms within the police department. Both violent and property crime in Richmond were at their lowest levels in over a decade under his leadership.

Chief Magnus is also involved in regional community corrections efforts, improving services for victims of domestic and sexual violence, as well as a myriad of youth programs and activities. For six years, Chief Magnus was the Police Chief of Fargo, North Dakota, where he played a key role in implementing the first two-state regional dispatch system in the nation, a forensic children’s interview center, and a refugee liaison program for the area’s many new immigrants and refugees.

Most of Magnus’ public safety career was in Michigan, where he rose through the ranks of the Lansing Police Department, another urban community with a diverse population. Magnus left Lansing in 1999 as the Captain of Administrative Services. Magnus worked as a Deputy Sheriff with the Livingston County Sheriff’s Department. In addition to his police service, Magnus worked as a paramedic for a hospital-based EMS provider in southern lower Michigan for 10 years. Magnus holds a master’s degree in Labor Relations and a bachelor’s degree in Criminal Justice from Michigan State University. He attended the Senior Executives in State & Local Government program at the Harvard Kennedy School.

As a member of Fight Crime: Invest in Kids, Chief Magnus has been a champion for access to high quality early education and healthcare, especially mental and behavioral healthcare. He has also partnered with the organization in efforts to strengthen and expand its Police Training Institute.