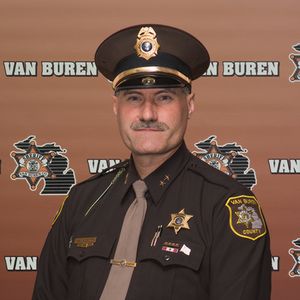 Sheriff Abbott has worked at the Van Buren County Sheriff’s department for his entire career of more than two decades. He managed the reserve division, and worked with animal control, prior to his election.

With 23 years of service, Sheriff Abbott started as a corrections officer, and became a road deputy in 1995. In 1997, he was named Deputy of the Year. In 2011, he was promoted to sergeant, putting him in command of all road deputies working on his shifts. He also helped start up the office’s Field Training Officer program.

He is a Bangor High School graduate and earned his bachelor’s degree in criminal justice from Ferris State University.