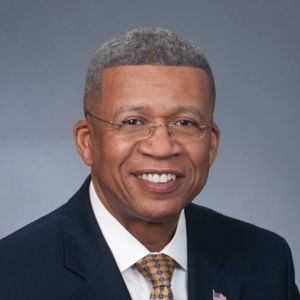 Prior to accepting his current job, Collins was the Adjutant General of Mississippi and served as the Commanding General of both the Mississippi Army and Air National Guard. He commanded a force of more than 12,275 Citizens Soldiers and Airmen.

Collins served on active duty in Operation Desert Shield/Storm as well as commanding the 155th Armored Brigade Combat Team during combat operations in Operation Iraqi Freedom from 2004-2006. Collins was promoted to brigadier general on May 10, 2005 while in Iraq, making him the first African American to attain the rank of general officer in the history of the Mississippi National Guard.

Following his deployment to Iraq, Collins was assigned as Director of Mobilization, United States Army Forces Command, Fort McPherson, GA. He held that post from February 2006 until October 2007.

In 2007, Collins was appointed by Governor Haley Barbour to serve as one of the three Commissioners for the Mississippi Worker’s Compensation Commission. He held that post until July 2010 when he accepted a position with MINACT Incorporated where he served as the Executive Vice President for Strategic Planning.

When Governor Phil Bryant took office in January 2012, he appointed Collins the Adjutant General of Mississippi. He was promoted to the rank of Major General on March 14, 2012.

Collins has received numerous awards and honors over his career.