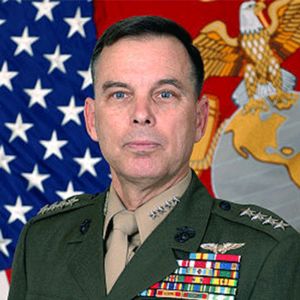 General William L. “Spider” Nyland has been a Mission: Readiness member since 2012. He was born in Coronado, California, and was commissioned as a Second Lieutenant in the Marine Corps upon graduation from the University of New Mexico. Early in his career he was ordered to Vietnam, where he flew 122 combat missions with VMFA-314 and VMFA-115. As a Major General he assumed duties as the Deputy Commanding General, II Marine Expeditionary Force, Camp Lejeune, North Carolina. He next served as the Commanding General, 2d MAW, then was advanced to Lieutenant General and assumed duties as the Deputy Commandant for Programs and Resources and subsequently served as Deputy Commandant for Aviation. He was advanced to General and assigned as the Assistant Commandant of the Marine Corps in 2002 where he served until 2005. In addition to a Master’s of Science degree from the University of Southern California, his military education includes Naval Aviation Flight Training, Amphibious Warfare School, Navy Fighter Weapons School (Top Gun), College of Naval Command and Staff, Naval War College, and Air War College. Upon retirement he returned to Pensacola, FL, where he offers consulting services from his home office. He is active as a Senior Mentor for the National Defense University in the “Capstone”, “Keystone” and “Pinnacle” programs. He formerly served as the Chairman of the Board for the Marine Corps Scholarship Foundation (twice), the Chairman for the Marine Corps Toys for Tots Foundation, and National Commander for the Marine Corps Aviation Association.