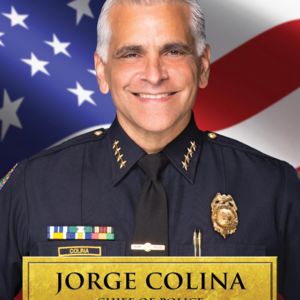 Jorge Colina was sworn in as the Miami Police Department’s 41st Police Chief on January 26th, 2018. He is deeply committed to the community he serves, and aims to use every resource at his disposal to make Miami the safest city in the country.

Chief Colina began his career with the Miami Police Department in 1990. Over his subsequent 27 years of service, he has earned more than 100 commendations and numerous awards, including repeated selections as Officer of the Month by the Miami-Dade County Chief’s Association.

He received his first executive staff appointment in December of 2009, when he was promoted to the rank of NET Commander of the Coconut Grove neighborhood. In 2011, he was promoted to the rank of Major and served as the commanding officer of several sections, including the Tactical Operations Section, Central District, and Internal Affairs. In 2015, Chief Rodolfo Llanes appointed him to the rank of Assistant Chief of Police. He is Miami’s first Chief of Police to have served as an Assistant Chief over all three of the agency’s divisions: Field Operations, Criminal Investigations, and Administration.