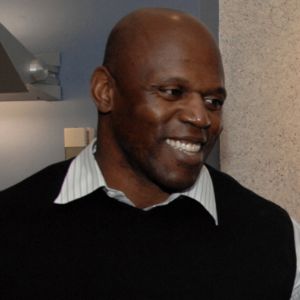 Senior Advisor to Champions for America’s Future, Ken Harvey is Highly regarded as a role model, athlete, and visionary—and a bit of an anomaly. While known for his dominance on the field as a four-time NFL Pro Bowler, today he’s prominently recognized for his work off the field as a futurist engaged in the intersection of technology, sports, and business. A true renaissance man, Ken is also a published author, health advocate, philanthropist, and football coach to our national leaders on Capitol Hill.

A Texas native, Ken earned football stardom at UC Berkeley and was selected in the first round, 12th overall, of the 1988 NFL draft by the Arizona Cardinals. There he played six seasons until signing with the Washington Redskins in 1994. He was selected to his fourth straight NFL Pro Bowl in 1997 and ended his career with 89 sacks, averaging 8.6 per season. Ken retired just prior to the start of the 1999 season.

In 2002, Ken received the prestigious honor of being nominated in the Washington Redskin’s highest accolade as one of “70 Greatest Redskins.” Shortly after receiving that honor, he was chosen and inducted into the “Redskins Ring of Fame at Fed Ex Field.” In 2015, he received his second straight nomination for the Pro Football Hall of Fame.