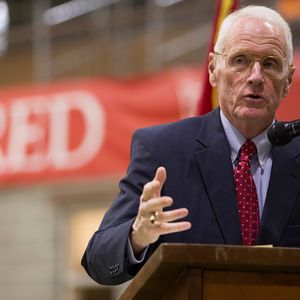 Major General (ret.) Michael Hall has been a member of Mission: Readiness since 2012. His 27 years of service in the United States Air Force included an assignment as the Commander of a Tactical Fighter Wing, where he pioneered the use of F-16 aircraft to provide close air support. General Hall served as the Senior Allied Air Liaison Officer during the first Gulf War and was Commissioner (1992-1995) of the New York State Division of Military and Naval Affairs, the agency tasked with the administration of the Army and Air National Guard. During his time as the Adjutant General, General Hall was also instrumental in the creation of the ChalleNGe and Starbase programs, which to this day use DOD resources to provide a stimulating educational environment for underrepresented and underserved youth in military communities. General Hall was promoted to the rank of Major General before retiring from the Air Force in 1995. He went on to serve as the manager of the Ithaca-Tompkins Regional Airport and currently serves as the President and CEO of the Wings of Eagles Discovery Center in Horseheads, New York.