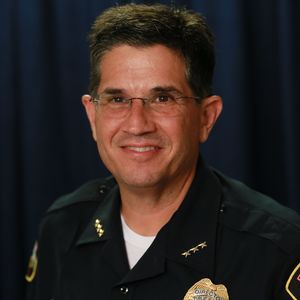 Chief Mike Yaniero serves as the Public Safety Director for the City of Jacksonville, North Carolina.

Chief Yaniero began his career in law enforcement as a Patrolman with the Sullivan County Sheriff’s Department in Tennessee.  During his tenure with the Sheriff’s Department, he rose to the rank of Lieutenant, supervising the Criminal Investigative Unit and serving as the SWAT Team Commander.   In 1995, he was appointed Deputy Chief of Police of the Bristol Tennessee Police Department. In 2004, Chief Yaniero began his career in Jacksonville as Police Chief and was named as the City’s first Public Safety Director in 2012.

Chief Yaniero is a graduate of East Tennessee State University and earned a B.S. in Criminal Justice as well as a Masters in Police Studies.  He is a graduate of the FBI National Academy and the Police Executive Research Forum’s Senior Management Institute for Police. He is certified by the American College of Forensic Examiners as a Law Enforcement Expert.  Chief Yaniero also holds certification as a nationally registered Paramedic and spent 20 years as a flight medic with the Virginia State Police. Chief Yaniero has earned numerous awards to include the Attorney General’s Dogwood Award, the FBI Directors Community Policing Award, CALEA Egon Bittner Award, the Order of Long Leaf Pine Award, and the 2012 Jacksonville Onslow Man of the Year.

He is a Past President of the North Carolina Chiefs of Police Association and is currently serving on the North Carolina Governor’s Crime Commission.  Chief Yaniero has served on the Onslow County Partnership for Children Board since 2012.  He and his wife Fay reside in Jacksonville and have two grown children, Rachel and Jacob.