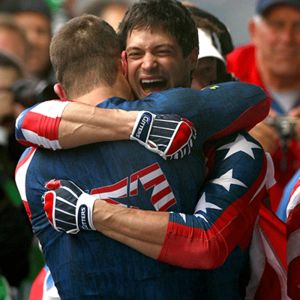 Steve Mesler is the cofounder, President, and CEO of Classroom Champions, an international education and mentorship organization. A three-time U.S. Olympian, Steve led Team USA to gold at the 2010 Vancouver Winter Olympic Games in the four-man bobsled. This was USA’s first gold medal in the event in 62 years.

Currently, Steve is a member of the Board of Directors of the United States Olympic Committee. Under Steve’s vision and leadership, Classroom Champions has grown from Steve being the only athlete involved in the pilot, working with 200 students, to now more than 50 Olympians and Paralympians who have mentored more than 11,000 students across the U.S. and Canada in less than five years. As a finalist for the International Champion for Peace award, Steve was also named one of Sports Illustrated’s “Athletes Who Care.” Steve is also a member of the National Jewish Sports Hall of Fame and the Buffalo Sports Hall of Fame.