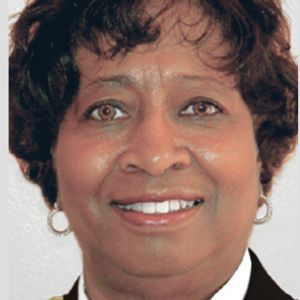 Sheriff Crawford has served in the field of criminal justice and law enforcement for over 40 years. Over 28 years with the Virginia Department of Corrections and as the Sheriff of Petersburg for 15+ years. Listed below are examples of her commitment to service in her community, the field of law enforcement, her church and her family. Sheriff Crawford has accomplished many significant firsts in her career. She was the first female in the Virginia Department of Corrections to serve as head of a male correctional facility. She was also the first female to serve as the Sheriff of the City of Petersburg. Sheriff Crawford was the first African American female to be elected unanimously as president of the Virginia Sheriffs Association. She was also elected unanimously as president of the Virginia Sheriffs Institute.

Sheriff Crawford is articulate and intelligent and is a role model for the young and the seniors. She directs her time and support to the citizens, but she also places great emphasis on providing many opportunities for incarcerated persons to succeed. After the closing of the Petersburg city jails, Sheriff Crawford developed and implemented a re-entry program. She revamped the General Educational Diplomacy program when the jails were open where there have been over 40 inmates who attained their GED. While the jails were open, she implemented the Petersburg Sheriff’s Office Puppy Program, which was the first program of its kind within a jail in Virginia. She later partnered with the Canine Companions for Independence to train puppies for citizens with disabilities. Additionally, when the jails were still in operation, inmates were given the opportunity to register and vote by absentee ballot in local, state and national elections.

Sheriff Crawford has instituted over 30 unique programs. Some of which include TRIAD, a program for the elderly which has over 2,500 senior citizens. Under the TRIAD umbrella, Sheriff implemented the File of Life, the Yellow Dot program, the 911 Cell Phone Bank and Adopt a Senior. She also provides a gun safety program for students in grades K-5, the DARE program for elementary students, a program called Project Lifesaver for those with Alzheimer’s, Dementia, or Autism, scholarships for graduating seniors, a visitation and gift program for children hospitalized during the Easter holiday season, turkeys and sides for the less fortunate during the Thanksgiving holidays and a toy drive program for children in need over the Christmas holidays.

She has also developed a driver education program for students working to get their drivers licenses. The class provides students the opportunity to prepare for driving by showing them the realistic dangers of texting and driving and impaired driving. Other programs include summer law enforcement camps for students, a bicycle rodeo, and a drug take back program to help citizens rid their homes of old, unused and expired drugs. Sheriff Crawford also continues to provide training and educational programs to educate her staff.

Sheriff Crawford has partnered with many agencies such as Reach Out and Read, The Special Olympics, Neighborhood Watch, Meals on Wheels and the Virginia State Police with the H.E.A.T. (Help Eliminate Auto Theft) program to enhance her community. All of the programs are funded by grants and donations which is a testament of the trust and confidence the community has placed in Sheriff Crawford.

In conjunction with Sheriff Crawford’s praise worthy and meritorious activities, she has achieved major accomplishments. For example, during her first term as Sheriff, she received the national designation of Certified Jail Manager through the Jail Manager Certification Commission (JMCC), by authority of the American Jail Association. This prestigious certification documents that mastery of a strong level of knowledge in the specialty and demonstrates continuing education and growth. Not only did Sheriff Crawford received this national designation; she has been recognized and appointed by the Honorable Timothy Kaine, former Governor of Virginia, to the Adult Fatality Review Team and now serves on the Department of Criminal Justice Services Board, appointed and reappointed by former Governor Terry McAuliffe. She has been a member of the National Sheriff’s Association Domestic Violence and Crime Victims Services Committee for a number of years, a member of the National Sheriff’s Association Committee on Animal Abuse and Cruelty and Vice Chair of the Petersburg Task Force on Domestic Violence.

Sheriff Crawford has received numerous awards and certificates for her years of service and work in the community; 2007 Who’s Who in America; 2007 Richmond-Petersburg Chapter of the National Association of Negro Business and Professional Women’s Club, Incorporated; 2008 The Martin Luther King Jr. Award for Political Affairs by the Alpha Phi Alpha Fraternity, Inc; 2009 Citizen of the Year by the Nu Si Chapter of the Omega Psi Phi Fraternity; 2010 Honored by the Good Shepherd Baptist Church at the African American Multicultural Celebration as a “First”; 2017 Petersburg Chamber of Commerce-Hometown Heroes Award and noted as one of twelve “Politically Unusual” elected officials across the country in the “O” (Oprah) magazine in November, 2012.

Some other accomplishments and acknowledgements of Sheriff Crawford’s outstanding work and service include the following; From 2014 until 2017, Sheriff Crawford was the only African American Female Sheriff in the United States; Sheriff Crawford is the only Sheriff in the Commonwealth of Virginia to attain the certification by the Department of Justice as a PREA (Prison Rape Elimination Act) auditor; She was selected for the Lifetime Achievement Award from the Virginia Correctional Association in 2016; Sheriff Crawford received the Medal of Merit from the National Sheriffs Association, “Sheriff of the Year” award in 2014, 2015 and 2017; Sheriff Crawford was formally honored with 2 resolutions in her honor for her dedication and community service from the House of Delegates, HJ 332 and by the Senate, Senate Joint Bill 182; She was awarded the Sojourner Truth Award from the Petersburg Club of the National Association of Negro Business and Professional Women’s Club, Inc. in 2018; Sheriff Crawford was profiled by FOX TV, WRLH, in honor of Women’s History Month in 2018; She also received the Social Justice Transformer Award from the Community Transformers Foundation, November, 2019; Sheriff Crawford was appointed to the Governor of Virginia, Ralph Northam’s Transitional Team in 2018; Named Law Enforcement Officer of the Year by YOVASO (Youth of Virginia Speak Out About Traffic Safety) in 2013; Sheriff Crawford was elected to serve on the Board of Feedmore from 2013-2018; She was honored by the General Assembly-House of Delegates in 2018 with Joint Resolution, HJ 274, in honor of and for her service to her community and state. She was recently elected (2020) as the Third Vice President of the The Virginia Association of Local Elected Constitutional Officers (VALECO). Most recently, Sheriff Crawford was honored by the Petersburg Chamber of Commerce with the F. Nathaniel Gatlin Award for her service to the local community and also unanimously elected as the Chair of the Riverside Regional Jail Authority Board (June, 2020). Additionally, she was just appointed as the Vice Chair of the Board of Governors for The Small and Rural Law Enforcement Executives Association, a national association of law enforcement consisting of Sheriffs, Chiefs of Police and their staffs.

Lastly and likely one of the greatest treasures in her life is her family. Sheriff Crawford is married to Leon Crawford, a retired military officer and they have 5 children, Latricia, Roderick, Cornell II, Leon and Courtney and 14 Grandchildren and 5 Great Grandchildren. Her mother is retired educator Esther T. Reese (deceased in 2000).

Sheriff Vanessa Reese Crawford believes in the scripture John 3:16, “I can do all things through Christ who Strengthens me”.