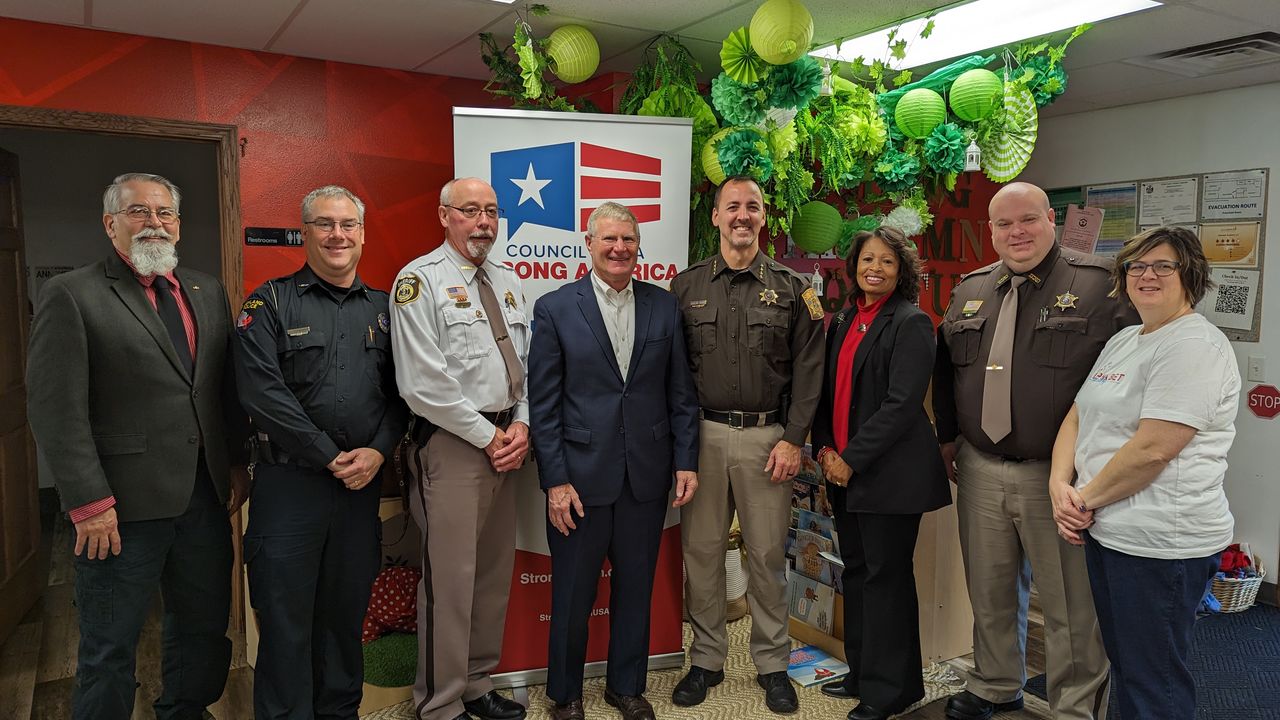 A new report shows that investments in early programs are essential to strengthening the workforce, boosting public safety, and enhancing national security

Members of Mission: Readiness and Fight Crime: Invest in Kids led two events in rural Wisconsin this week, touting a new Council for a Strong America report that highlights the vexing early childhood challenges facing families in these communities.

In all, four rural law enforcement leaders and three retired military leaders participated in the events, which took place at Pulaski’s Precious Cargo home-based child care center on Dec. 13 and Highland’s Alphabet Academy on Dec. 14. At the events, the leaders summarized evidence-based arguments for early childhood funding, as summarized in the report Early Childhood Programs’ Scarcity Undermines Wisconsin’s Rural Communities. Also in attendance in Highland was State Senator Howard Marklein, the co-chair of the Joint Committee on Finance, who represents a vast area of Southwest Wisconsin.

Here’s what some of the leaders had to say:

Grant County Sheriff Nate Dreckman, who also serves as President of the Badger State Sheriffs’ Association, noted: “Parents in Grant County depend on quality child care providers to keep their children safe while they work. And those children depend on the nurturing environments that providers like Alphabet Academy create that stimulate healthy brain development. These child care providers also help reduce crime in the long run by helping kids get on the right path towards success early in life.”

U.S. Army Reserve Brigadier General (Ret.) Kenneth Koon of Waunakee told attendees: “For more than a decade Mission: Readiness has been sounding the alarm that a majority of 17- to 24-year-olds in our country are ineligible to serve in the military. That overall ineligibility figure is now up to a shocking 77 percent. Over three-quarters of young Americans couldn’t qualify for military service, even if they wanted to. We need to strengthen early childhood care and education so our kids can succeed.”

U.S. Army Reserve Major General (Ret.) Marcia Anderson of Verona said: “Child care centers are at the front lines of preparing our children for success in life. In recent years, many centers like this have had to turn away families looking for child care because they have limited capacity or can’t find the educators they need to serve more children. And more than half of Wisconsinites live in a child care ‘desert,’ where there are more than three children under age 5 for each licensed child care slot.”

Iowa County Sheriff Steve Michek has been advocating for early childhood investments for years. He urged state legislators to heed the call for particular attention in rural Wisconsin communities. “Our state makes a solid commitment to early education and care, but to meet the needs of children and families living in Wisconsin’s rural communities, state legislators must help increase the supply, quality, and affordability of early childhood education and care throughout the state, prioritizing rural areas,” Michek said. “The report released this week makes a convincing evidence-based case for more investments. In particular, we need to urge continued funding for our state’s Child Care Counts program when the Wisconsin Legislature convenes.”

Coleman Police Chief Ida Soletske, a member of Fight Crime: Invest in Kids, said it’s not coincidental that “Wisconsin’s correctional system is full of people serving time for serious and costly crimes,” and argued “it doesn’t have to be that way. Providing children with high-quality early learning opportunities can set them on that path to success in school, so they will be ready for college and careers, and less likely to later engage in criminal activity.”

Wisconsin child care centers have benefited substantially for the past two years from federal investments that the state was able to administer through Child Care Counts, managed by the state Department of Children & Families (DCF) that has helped thousands of Wisconsin child care providers.

Funding for Child Care Counts is scheduled to expire at the end of 2023, absent action by the legislature to continue the program.

Watch a clip of the event below: