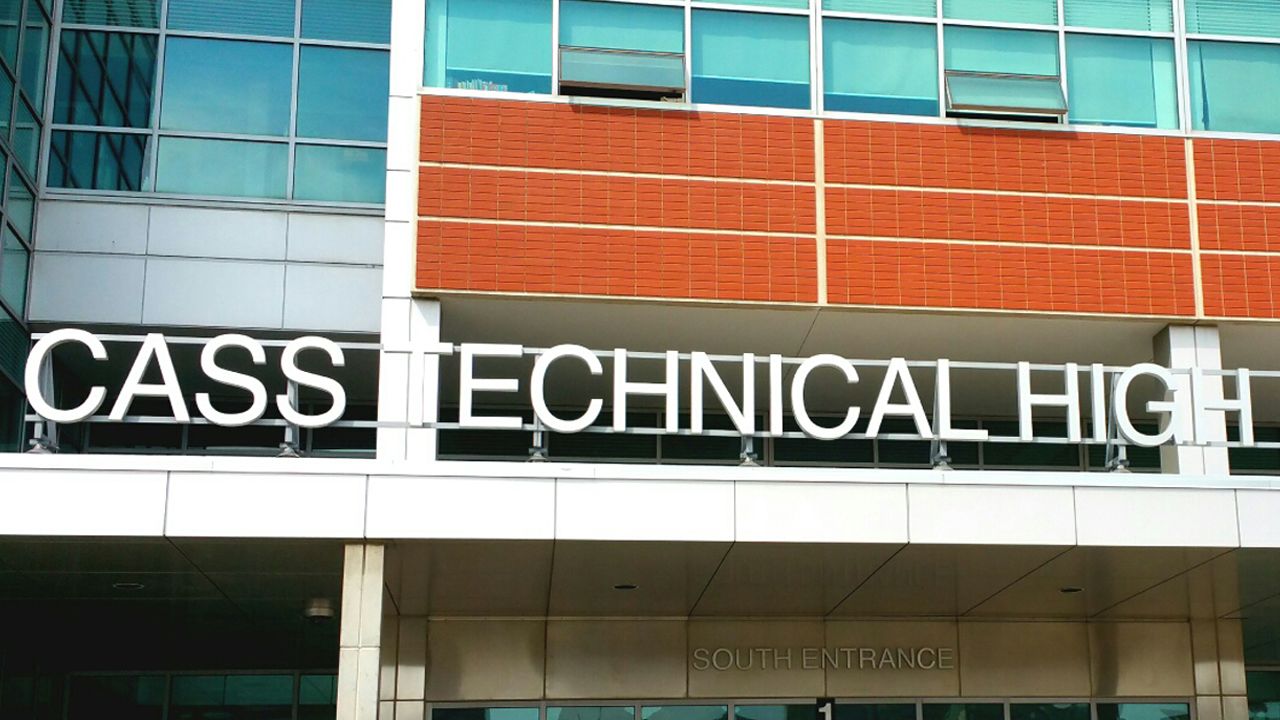 A Beacon of Hope Shines in Detroit

“When I got here three years ago,” he explained, as he traced an imaginary line across a horizon filled with sun-soaked skyscrapers, “most of the buildings that you can see were abandoned.”

Eclectic rows of empty, new, and renovated structures populate that horizon. The odd mix reflects the city’s troubled past.

Detroit’s recent struggles are well-documented. The city bottomed out in 2013 with a declaration of bankruptcy, but, now, four years later, markers of a resurgence sprout from the concrete.

Even during Detroit’s toughest times, though, Cass Technical High School was a beacon of hope, success, and potential.

That point became apparent to me last month at the Hewlett Unconvening on Deeper Learning (HUDL). As part of HUDL, I participated in a “Deeper Learning Project Slice,” an opportunity to experience deeper learning at a site visit in the Detroit community. I traveled to Cass Technical High School (or “Cass Tech,” as it’s known more informally).

There, I was able to speak with students, teachers, and administration about the challenges—and triumphs—that are part of everyday life in and around Cass Tech.

Our visit began with some introductory remarks by the poised, proud Principal Lisa Phillips. She ran through an array of dazzling facts and figures about the school, all of which were certainly impressive. But then she honed in on something even more important than the outcomes—the “how” that produces them.

We’re a melting pot for kids who want to do better. We meet you where you are.

She explained that the top-line mindset at Cass is always to do everything in the best interests of the student. That mentality sometimes requires a firm but fair hand, but she emphasized that it’s vital to demonstrate to students that teachers and administrators genuinely care about their lives and education.

“If you don’t love my babies, you can’t work here.”

Phillips, who recently earned Michigan Principal of the Year honors, emphasized that “we have to teach these kids that the world isn’t easy.” She mentioned the resilience of the students at Cass, providing as an example a female student who had lost her mother the day before, but who was nonetheless at school that morning, ready to learn. “She told me that her mother would have wanted her here, continuing her education.”

Phillips taught English at Cass for years before transitioning into an administrative role elsewhere. She then returned to Cass in 2010 and noticed that there had been a shift. She said that the “old” Cass was a “Who’s Who school.” “If you didn’t have a 3.0 GPA, they wouldn’t even look at you here,” she explained, as other longtime faculty members nodded in agreement behind her.

The landscape is different now. Phillips says that changes in Detroit Public Schools since she originally left have altered the makeup of Cass’ student body. “We’re a melting pot for kids who want to do better. We meet you where you are.”

The Cass Tech of 2017 includes students from throughout Detroit. As in the past, there are still those who are exceptional academically coming out of middle school, but there’s also a place for students whose performance up to now may not yet match their potential.

“I don’t want anyone to leave this school without a path,” says Phillips. With its numerous specialty courses, IB program, and myriad curriculum pathways—along with 98% graduation and 97% college-bound rates—Cass Tech appears to be achieving Principal Phillips’ goal.

Cass also partners with private companies, foundations, and other employers to offer students work opportunities that help them gain vital, practical experience that otherwise might not be available to them. These partnerships include over 200 internships from major regional businesses like Ilitch Holdings, Chrysler, Walbridge, United Auto Workers—Ford, and the City of Detroit itself.

All of that is not to say that the students at Cass Tech have it easy, whether at school or otherwise. Phillips made it clear that pupils must work hard and maintain focus on their studies to take advantage of the experiences Cass Tech provides. Meanwhile, many students battle the same challenges that students around Detroit and in other disadvantaged areas face.

I was able to get more insight into both of those points when Jason Amos of the Alliance for Excellent Education and I sat down with Lenk, a physics teacher at Cass. 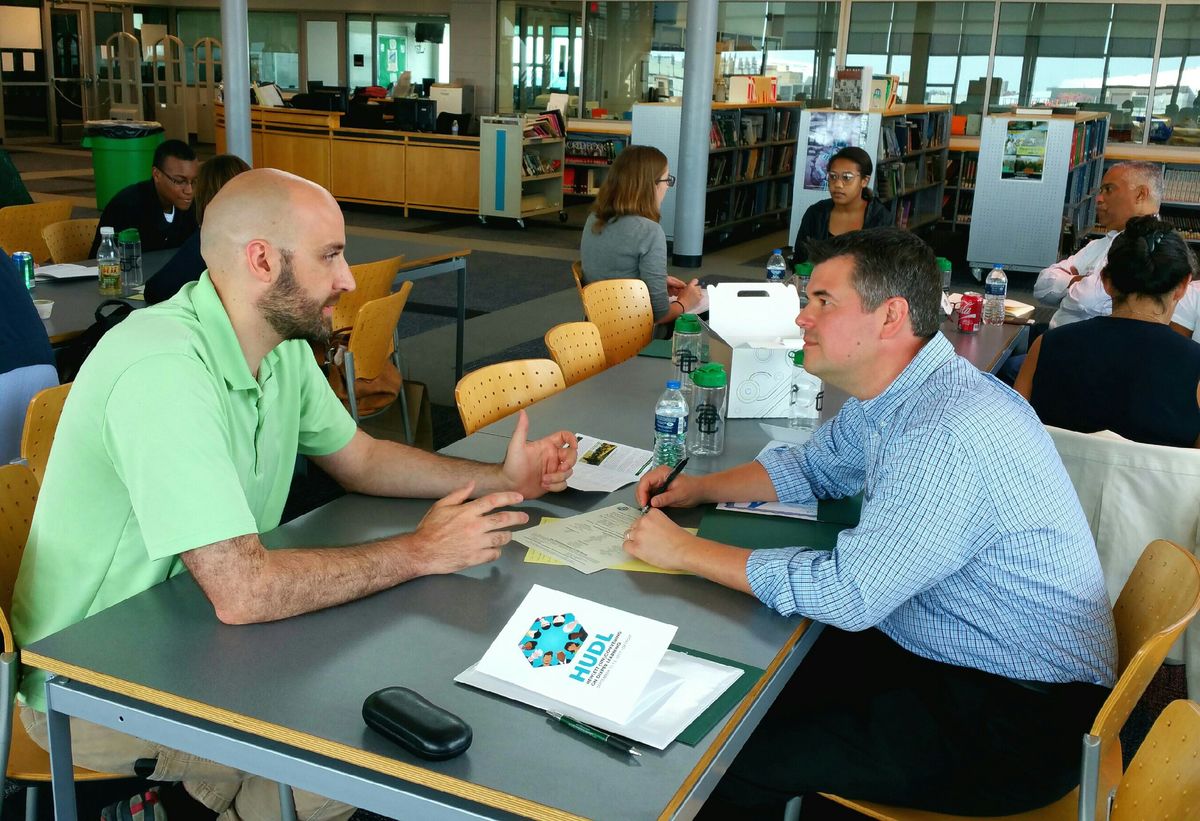 Lenk previously taught in both suburban and urban schools in the Des Moines area before coming to Cass Tech. He talked about some of the obstacles that students at Cass—and throughout Detroit—have to overcome in order to access any sort of real educational opportunities.

“The district has so many legacy costs,” he noted. “That can impact budgets.”

Lenk explained that Detroit has to spend significant resources to maintain old, out-of-date facilities. What’s more, we learned during some of the HUDL exercises that the amount that Detroit’s school system pays on bond interest is a whopping 13 percent, several times larger than the surrounding systems.

Saddled by a combination of aging infrastructure and a tax base that has eroded considerably since the city’s heyday, Detroit Public Schools suffer. Students currently in the city’s school system often bear the brunt of the negative effects of hamstrung budgets.

Nonetheless, principles and practices that lead to deeper learning are in place at Cass, imparting skills that bolster students’ efforts to reach positive educational and career-related outcomes. Take Lenk, for instance. He employs a somewhat unconventional approach to teaching physics—one that embraces cross-disciplinary, “executive-functioning” skills that employers crave. One such skill is communication.

Effective communication might not be the most likely deeper-learning competency you’d expect to connect to physics instruction. Mastering rigorous core content? Sure. Developing academic mindsets? No question. Directing one’s own learning? Absolutely.

Ah, but that’s the beauty of Lenk’s class. His tests often consist of scenarios involving a set of characters—like a post-apocalyptic zombie horror movie, to name one. It’s the students’ job to figure out how to write a story that explains how these characters can achieve their goal or escape their predicament using physics.

But they also have to be able to articulate those concepts in a way that melds creative problem-solving and effective communication.

Students who learn how to do that won’t just succeed in Lenk’s class or other classes like it. They’ll be the ones who can excel in higher education and the workplace, as they can go beyond the basics of rote memorization and superficial understanding of subject matter.

That’s the kind of experience that leads to deeper learning.

But the passion for helping students at Cass extends beyond classrooms—even unconventional ones. Lenk’s Cass Tech Video Game Club is a prime example.

There, Lenk is able to bring together every “type” of student at Cass, regardless of social clique or background. Students gather after school on Friday from 3:30 to 6:00 PM on campus. Club members bring in their own gaming consoles or PCs, and Lenk provides the space and the monitors.

The games are as diverse as the kids, but the students are united by their love of gaming. The fellowship, camaraderie, and fun that bonds them together is difficult to duplicate and impossible to value.

“The most beneficial part is the students feeling like they’re part of a true community,” Lenk says. “Because of the club, students believe they’re able to meet people who they didn’t think liked the same stuff they liked.”

Lenk explains that there’s no substitute for that kind of social support. “If you build something where people can be vulnerable and feel supported, it nurtures their needs in a way that not many things can.”

That’s important for many of the kids at Cass, who face difficulties that are a non-factor in the lives of their peers at schools in more affluent areas across the country. Lenk mentioned that a student in his physics class might disappear for a couple of weeks without explanation, only to reveal upon returning that his mother couldn’t afford to get her car fixed until payday, and there was no other way to get to school on time.

Lenk is doing his part to counteract the negative effects that inequities like those can create.

Afterschool support systems that give students that sense of community help. So do educational models that stress and implement the core competencies of deeper learning.

If we’re truly committed to that Dream, and to the notion of the United States being the Land of Opportunity, we must afford all of this country’s children the chance to become productive, safe, healthy citizens.

That will take effort. In many cases, that effort will include embracing innovative educational models in the way that Cass has done.

There, through good, old-fashioned hard work, and with the help of administrators like Principal Phillips and teachers like Mr. Lenk, kids are finding ways to amass the portfolio of skills and experiences that will make a positive difference in their lives and careers.

But making educational opportunity more equitable is a work in progress. So is Detroit’s revival. Both are daunting tasks, but not impossible ones.

Lenk has lived that truth. He came to Cass Tech not long after Detroit had cratered. Now, three years later, in the midst of the city’s reclamation project, educators like Lenk are creating support systems, learning experiences, and opportunities for the kids who need them most.

That means a lot in a city burdened by a recent shortage of optimism. But, looking out across that Detroit skyline, Nick Lenk sees the first signs of a recovery.

“I’m feeling hopeful that things are finally heading in the right direction.”