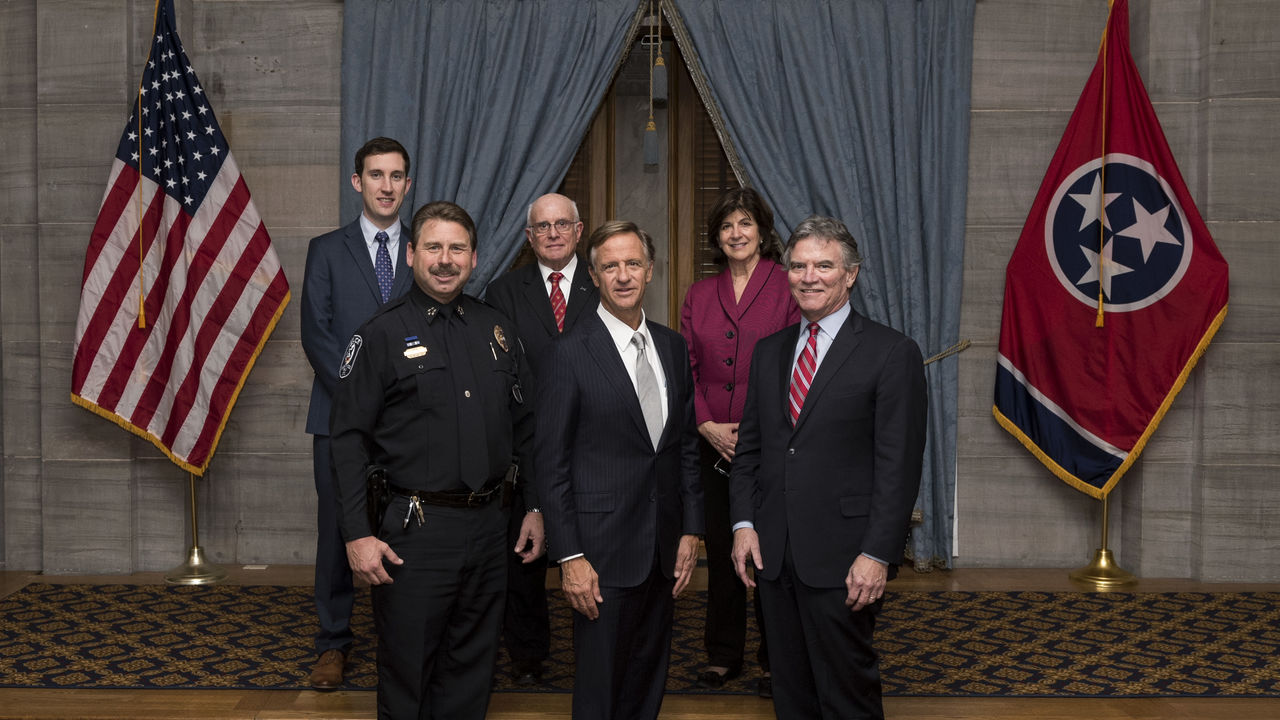 Ensuring a Stronger Tennessee for Years to Come

In addition to meeting directly with Governor Haslam, Speaker Harwell and other legislative leaders, the three leaders delivered remarks from the Old Supreme Court Chambers, each sharing their own perspective on why high-quality pre-K makes a difference in public safety, national security, and the future workforce. With the help of State Representative Mark White (R-Memphis), they also released a new report from Fight Crime: Invest in Kids, titled “Pre-K Key to Cutting Prison Costs and Boosting School Success in Tennessee.”

“Law enforcement officers see this all the time: kids who get a strong start in their formative years have a better chance of leading crime-free lives and avoiding run-ins with the law,” said Chief Hughes. Doubling down on his claim, he cited a study of a high-quality pre-K program in Chicago that followed children from preschool age into adulthood. Researchers ultimately found that children who had not participated in the high-quality pre-K program were 70 percent more likely to be arrested for a violent crime by age 18 than those who had, he said.

Those sorts of numbers come with a financial cost.

“If we can make smart, effective investments in our kids on the front end to prevent costly incarceration on the back end, we can consider that a win for public safety and for public dollars,” he said.

If we can make smart, effective investments in our kids on the front end to prevent costly incarceration on the back end, we can consider that a win for public safety and for public dollars.

Brigadier General (Ret.) Thomas Swain, U.S. Army spoke after Chief Hughes and said preparing our youngest citizens to succeed is not only critical to public safety, it’s also a matter of national security. He cited data that shows 71 percent of America’s youth cannot qualify to join the military due to obesity, crime, and/or drug abuse.

“Tennessee policymakers should continue to expand high-quality early learning to ensure that all children are prepared in mind, body, and character to succeed at whatever career they choose, including military service,” he said.

Future careers were also top of mind for Memphis businessman Larry Jensen who explained how pre-K is a crucial tool to developing a healthy workforce.

“Businesses like mine and others throughout the state and beyond will need a strong workforce pipeline in order to remain healthy and competitive in the 21st century. Right now, that pipeline isn’t strong enough,” Jensen said, adding that high-quality early education “will help our children to achieve” and therefore build that workforce Tennessee needs to succeed.

Jensen also outlined his perspective in an op-ed co-written with Rep. White for Memphis’ Commercial Appeal. The pair called high-quality pre-K an investment that “will help ensure a stronger economy, a stronger Tennessee, and a stronger nation for years to come.”