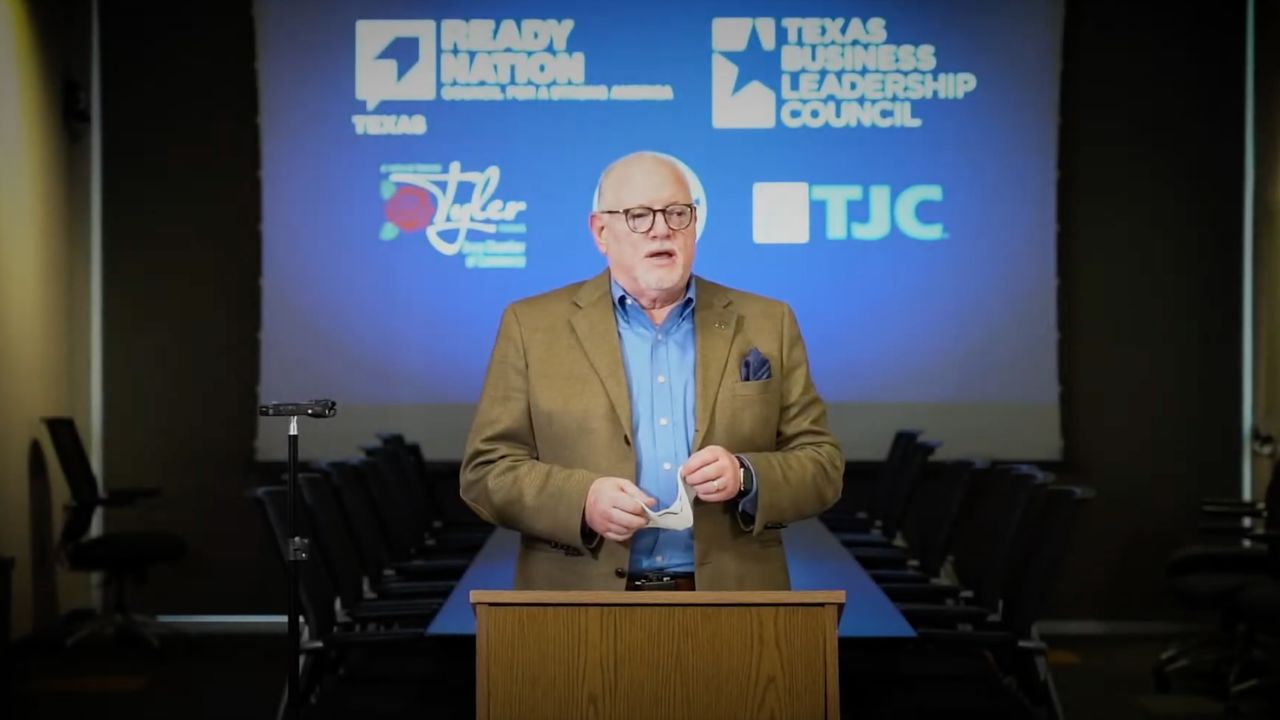 Phil Burks, CEO of The Genesis Group, kicked off the event at 3 p.m., introducing a number of individuals to speak on behalf of education efforts for East Texas. Burks then passed the baton to Joe McMahan, Texas State Director for Ready Nation.

“Texas expects to create 2.1 million new jobs. That was before COVID, so those numbers may change some. By 2030, our state aims to equip 60 percent of 25 to 34 year-olds with some sort of postsecondary education or some sort of credential. But the problem is today only 43.6 percent of that population really has some sort of credential,” said McMahan. “It exposes them into careers and industries that maybe they would have never thought about before. So it provides a lot of great opportunities,” McMahan continued.

President of The Genesis Group Jim Nipp jumped in and described his company’s efforts to connect with students through its job shadowing program. He shared an example of a time when they hosted an AP math class to show real-world use of the lessons learned in school.

“We give them a problem about increasing our productivity. ‘How many people do we need to hire? We have a project that takes this long.’ We give them all the variables and we let them whiteboard it out. During that meeting, they ultimately solve it with a linear equation and they get the answer. Those are the meetings that we have here every day. So they get to see algebra at work or math at work or those reasoning skills at work,” Nipp said.

“While we want every single kid to go to college, they’re not all going to do that, but a lot of them can go straight into the workforce. They are prepared because of these different partnerships.”

Representing the Tyler Area Business Education Council, Executive Director LaToya Young touched on McMahan’s comments regarding the statewide education goal. “Joe mentioned the statewide goal of 60x30—60 percent of Texas residents will have a [post-secondary] credential by 2030. Well, if you live in the Tyler area, you know that we’re overachievers,” she explained.

Justin Yancy, President of the Texas Business Leadership Council, a statewide network of CEOs and executives working to build a more “globally competitive Texas,” concluded the event by describing several statewide initiatives. He discussed the importance of Youth Apprenticeships and promoting a model in which students work at a company part-time during their junior and senior years of high school.

Yancy also touched on the pandemic and “its short term effect” on the economy and educational initiatives.

“I hope we all agree in this room that there’s zero doubt that the country will become stronger for the challenges we’re facing now,” said Yancy.

In these times of great uncertainty, it’s important to invest in this country’s future. Tyler, Texas business leaders and education advocacy groups are working hard to make sure that the high school students of today contribute to and create a strong workforce tomorrow. Their work will repair the social and economic disruption we’re now facing, and ensure that our future is bright.