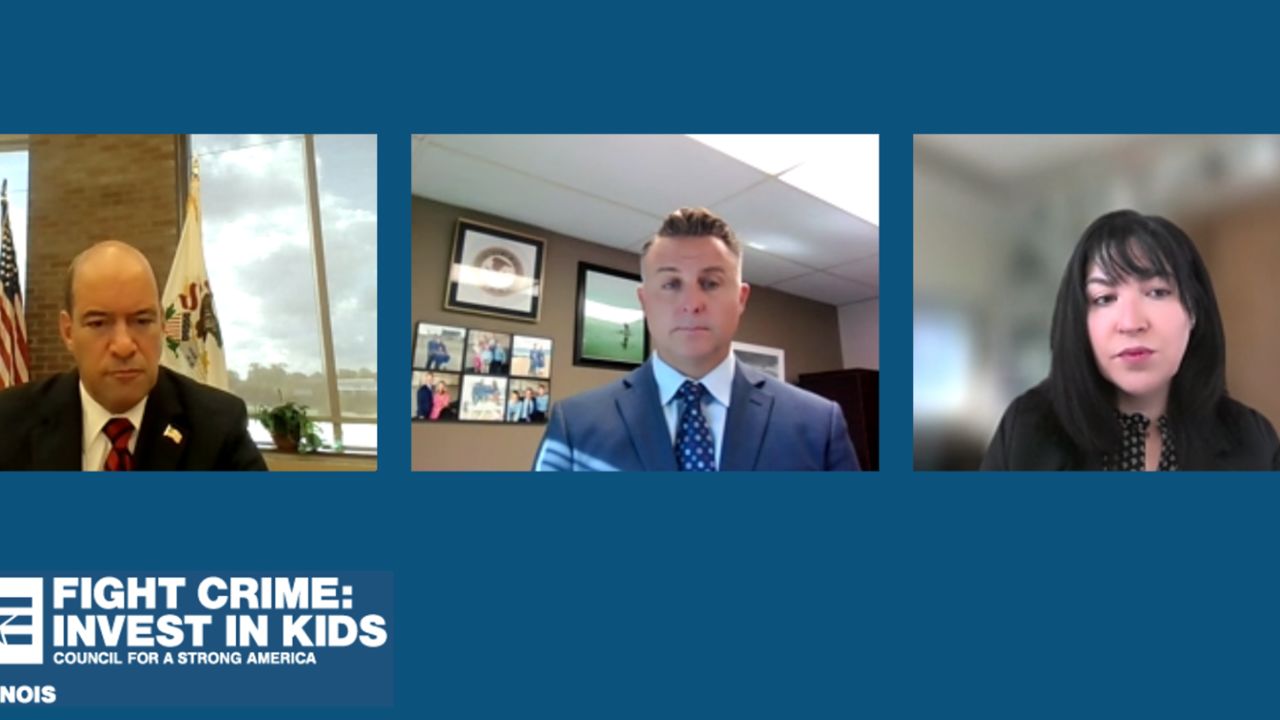 Law enforcement leaders throughout Illinois are calling on state decision-makers to strengthen opioid prevention and remediation efforts by investing in early childhood programs that are shown to help with such goals—and doing so with a promising, new source of funding.

The settlement of several national lawsuits against the distributors and manufacturers of opioids will bring hundreds of millions of dollars to Illinois over the next two decades. A portion of these resources should be committed to birth-to-3 initiatives helping the youngest and most vulnerable victims of the opioid epidemic, say DuPage County State’s Attorney Robert Berlin and other members of Fight Crime: Invest in Kids Illinois.

“Tragically, children have been hit especially hard by the opioid epidemic,” said Berlin, one of the prosecutors who originally filed some of these lawsuits. He was among the law enforcement leaders participating in a news conference Wednesday. “As our state considers where to most wisely invest its settlement funding, we must prioritize efforts that support vulnerable kids and their families and help prevent future opioid abuse.”

Berlin noted that, every 25 minutes nationwide, a baby is born suffering from opioid withdrawal, or Neonatal Abstinence Syndrome. NAS rates skyrocketed by 64 percent in Illinois between 2011 and 2017, alone, before opioid abuse grew even further during the COVID-19 crisis.

“As the adoptive parents of a child who was born with Neonatal Abstinence Syndrome, my wife and I personally know just how significant the toll of opioid addiction can be on infants and toddlers,” added Winnebago County State’s Attorney J. Hanley. “Young people born to addicted parents, like my adopted daughter, need support to ensure they can grow up to be healthy and successful.”

Hanley and Berlin are among 100+ Illinois prosecutors, sheriffs, and police chiefs who have joined a public statement from Fight Crime, calling for settlement-funding prioritization of voluntary home-visiting programs that are known by various names, including Healthy Families, Maternal and Child Home Visiting (formerly Parents Too Soon), and Nurse-Family Partnership.

These initiatives work with new and expecting parents in supporting the healthy development of infants and toddlers. The programs can help parents with addiction problems connect with treatment options, and several home-visiting programs have been shown by research to reduce what are known as Adverse Childhood Experiences—such as child abuse and neglect—which, in turn, are linked with a greater likelihood of future opioid abuse and criminal activity.

“The programs we are talking about today are backed by clear data and research,” said Rock Island County State’s Attorney Dora Villarreal. “If we want to see significant improvements in public safety, we have to look at evidence about what works best, and act accordingly.”

Unfortunately, Villarreal added, a 2020 analysis showed that 15,000 Illinois families lacked the home-visiting help they needed—one reason why Fight Crime members are looking to forthcoming funding from the settlement of opioid lawsuits.

In February, Illinois Attorney General Raoul—working with several county prosecutors—announced the state would receive approximately $760 million in settlement funding from a national lawsuit against major distributors and manufacturers of opioids, including Johnson & Johnson. Those dollars are intended for opioid prevention and remediation purposes over a period of 18 years, with some of the funding going to counties and municipalities for distribution.

In July, Raoul revealed that two further lawsuit settlements will add to that funding total, once details are finalized. Governor Pritzker issued an executive order creating a statewide office to oversee the distribution of settlement dollars. The executive order also calls for the establishment of an advisory council consisting of experts with experience addressing opioid use and addiction to determine the best use of funding.

“Addressing the needs of pregnant or parenting women and their families, including babies with Neonatal Abstinence Syndrome,” is one approved use of these resources, named in the state’s Opioid Settlement Agreement—and, law enforcement leaders said, further evidence of the relevance of their recommendations.

Fight Crime has shared its recommendations with several key Illinois decision-makers, including officials at the Department of Human Services and a number of legislators. Its law enforcement leaders will continue to monitor these funding determinations and seek further opportunities to support efforts prioritizing the well-being of young people, with an eye toward boosting crime prevention and bolstering public safety.

Watch the highlights of the virtual press conference here:

Watch a full video of the virtual press conference here: