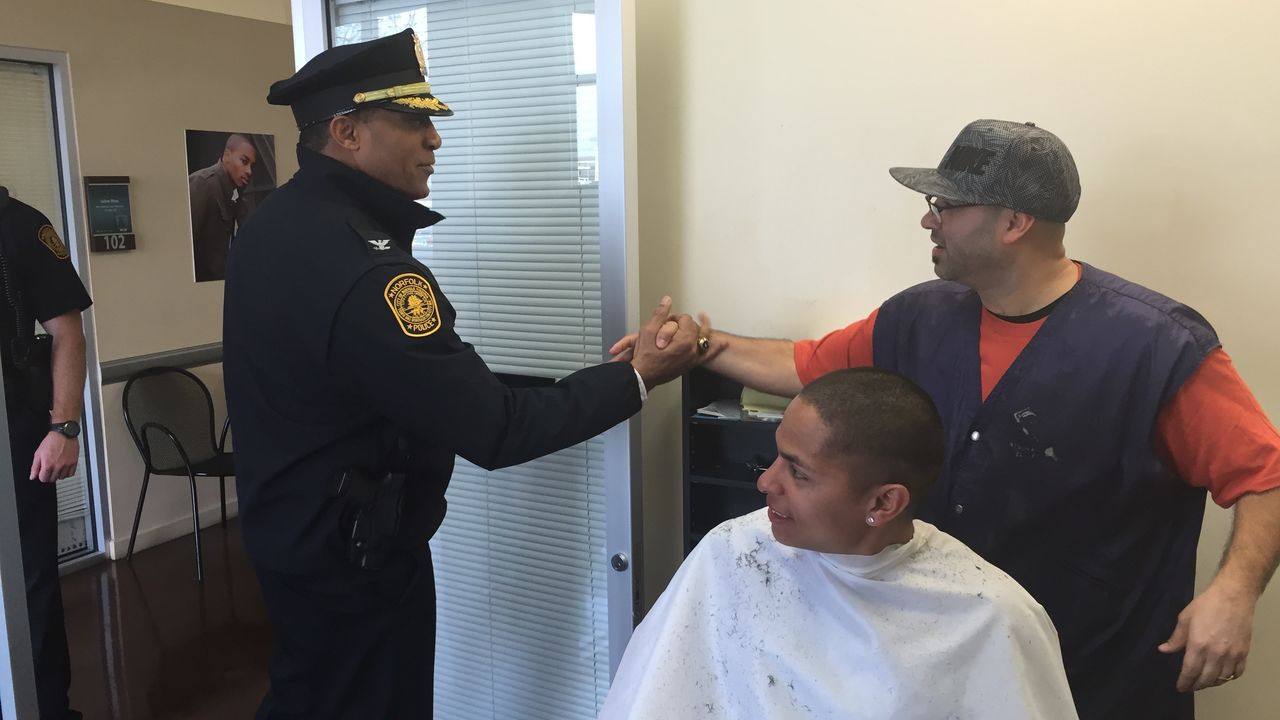 Engaging the Community at the Barber Shop

Pictured Above: Chief Boone greets a local barber and client as part of his department’s ‘Five-O and Fades’ initiative.

The local barber shop is a gathering place for men of all ages to talk to each other and socialize in a safe environment. Knowing this, in January 2017, Chief Boone began an initiative called Five-O and Fades which is a partnership with local barbers who welcome officers into their shops two Saturdays a month to engage with customers. Officers learn more about the community members they are serving, particularly teenage and young African-American men who police struggle to build trust with, to hear about complaints they might have and to answer questions like what to do if they’re stopped by the police. The goal of these Saturdays is to create the opportunity for open dialogue between the officers and the young men in the community, allowing them to discuss local and national incidents between young men of color and police, or to talk about anything that’s on their mind.

One barber who is participating in the initiative, Kevin Mills, told the Virginia Pilot during the launch of the initiative that he hopes it leads to a better understanding of how black men are treated by police compared with other races. He added, the dialogue occurring through this initiative, has the potential to lessen conflict and improve relationships between the police and community members.

In addition, in September 2017, the department held a back-to-school haircut event in which barbers gave away free haircuts to start the school year. The event - which included a block party atmosphere, games, food and an outdoor movie - drew nearly 500 community members, allowing officers to answer questions and hear feedback from the community.

Local clergy members have been meeting regularly with the Chief of Police for a number of years. When Chief Boone took office, anticipating the question, “Chief, what can we do to support you?” he came up with the idea of having clergy members ride along with officers in each of the city’s three patrol divisions on Friday and Saturday from 8 p.m. until midnight – when there tends to be an increase in calls for service.

According to crime data, there are often three to four churches near spots where crimes occur. When the clergy members respond to calls with the officers and encounter someone who has been a victim of a crime, the clergy stay in the car until the officer determines the crime scene is safe. Once it’s safe, the clergy are then able to offer words of comfort or prayers to the victims and, most importantly, help bring calm to the environment. This added layer is critical to safety and moving an investigation forward. Further, it can help build trust with law enforcement as community members are able to experience the good rapport between clergy and the officers, allowing for individuals to open up and share information. Finally, it gives the clergy the opportunity to see the types of situations officers walk into and gain a better understanding of some of the crime problems that impact their community.

Community Policing is the Cornerstone for a Safe Community

Chief Boone sees the police as community members. He wants to continue to create unique, authentic opportunities for police officers and members of the community to build mutual trust. That happens, he says, by remaining accessible to the community, both through the department’s new initiatives and by showing up at community meetings, providing his personal cell phone number, and having his command staff provide their phone numbers as well. Through these strategies community members are calling and providing information that helps the department deter crime. Clearly, there is more than one reason why Norfolk has recently experienced its lowest violent crime rates in 32 years!