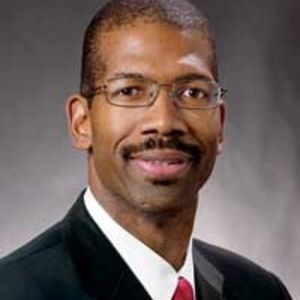 Michael Harper is a native of Illinois, born in Chicago in 1957. He is a graduate of North Park University, where he led the team to three consecutive NCAA Division III national basketball championships. He played basketball for the Portland Trail Blazers during the 1980-81 and 1981-82 seasons and spent the following six seasons playing in Europe. Harper was one of several players in the Small College Basketball National Hall of Fame Class of 2019 for his accomplishments at North Park University before his professional career with the Portland Trail Blazers.

Harper has been active in the community as a Portland School district employee, businessman and spokesperson. He is an active member of the Southwest Rotary and has been selected as a Royal Rosarian. He is an Oregon Liquor Control Commissioner. Prior to that, he was appointed on the State of Oregon Commission on Children and Families. He is also an assistant men’s basketball coach at Lewis and Clark College. He is a current foundation board trustee for Western Oregon University. Harper enjoys playing golf with the Blazer Alumni, mentoring numerous youth teams and spending time with his family. His busy schedule includes giving presentations on a variety of topics ranging from self-esteem building, drug awareness and team building. After eight years of professional sports, Harper says, “My commitment was to my team and teammates. I will continue to use that same philosophy of teamwork and team building in my insurance business. What I want is a win-win situation.”