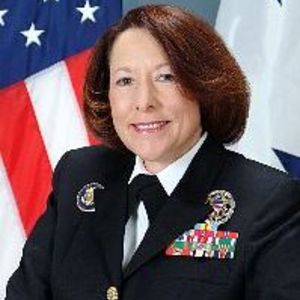 After completing over 35 years of military service, VADM Nancy E. Brown retired from her position as the Director, Command Control, Communications and Computer Systems, The Joint Staff. Over the course of her service, VADM Brown helped create a career path for information technology in the Navy.

In 1993, VADM Brown assumed command of Naval Computer and Telecommunications Station Cutler, Downeast, Maine. In August 1995, she was assigned to the National Security Council at the White House until 1997, when she assumed command of the Naval Computer and Telecommunications Area Master Station Atlantic, Norfolk. VADM Brown returned to the White House in June 1999 as the Deputy Director of the White House Military Office. In October 2000, she began serving as Deputy Director and Fleet Liaison, Space, Information Warfare, Command and Control (N6B). VADM Brown then assumed duties as Vice Director for Command, Control, Communications, and Computer Systems (J6), the Joint Staff in August 2002. Two years later, VADM Brown deployed to Iraq, becoming the first Multi-National Force-Iraq C6 headquartered in Baghdad, and returned to the Joint Staff in April 2005. In August 2005, she assumed the duties as J6 Director for both North American Aerospace Defense Command and United States Northern Command before assuming her last active duty.

Professional affiliations and civic involvement: Armed Forces Communication and Electronics Association, Military Officers Association of America, United States Naval Institute, Veterans of Foreign Wars, American Legion, Disabled American Veterans, and Vice Chairman of Veterans Honor Flight of Southern Illinois. Veterans Honor Flight is an organization that provides free, one-day trips for veterans to Washington D.C. to visit war memorials. Reflecting on her experience, VADM Brown said, “Being able to give them a homecoming and honor their service is just an unbelievable experience, and one I am so grateful to have been a part of.”

I cannot think of any more important mission than to ensure that our children are given every opportunity to grow into nation ready adults.

Why I’m a member of Mission: Readiness: “The greatest weapon our military has is the men and women who wear the uniform. Without the skill and expertise of the Sailor, Soldier, Airman or Marine, no weapon system can operate effectively. There is a linkage between our public school systems and the well-being of our future economy and national security. Mission: Readiness is focused on this challenge, and I am honored to be able to help further the emphasis on today’s youth.”

Family: VADM Brown was raised in Marion, Illinois. She is married to retired Lt. Col. Peter Hesser of the U.S. Marine Corps.

Best career advice I ever received: “My father told me to join the Navy. He claimed they had the best food!”