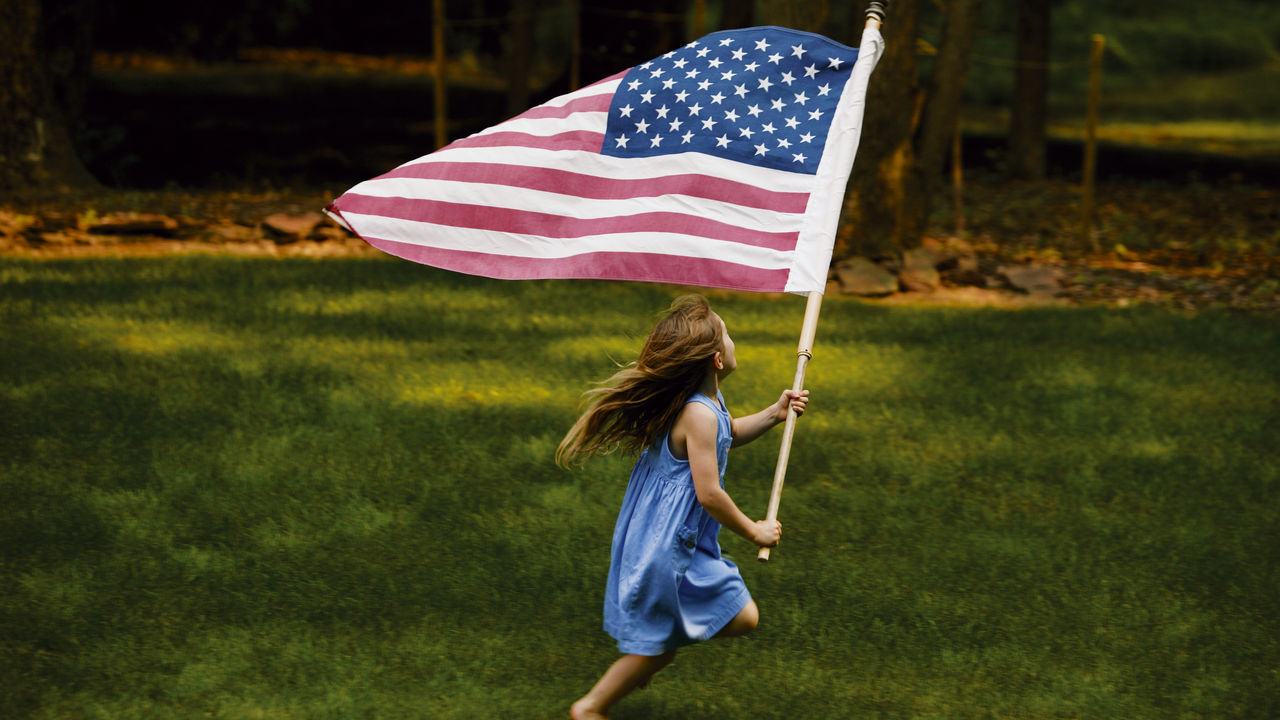 Citizen-readiness reflects more than education: physical well-being is also important. Yet excess weight is a problem for 60% of young Americans—a statistic that remains stubbornly high despite an increased emphasis on healthy living in the U.S.[56]

This obesity epidemic represents one of the greatest threats to young adults’ ability to become productive adults: not only affecting their health and happiness—but also job performance and eligibility for military service.

These problems are preventable, if healthy habits are formed in childhood. The habits that families adopt are most important, but schools also have an important role to play in providing healthy choices as the places where children spend half of their waking hours.

There are two current threats to healthy options in schools. First, federal lawmakers are currently deciding whether to maintain recently-updated nutrition standards for healthy foods in schools. Second, states and localities are cutting physical education (PE) programs, despite the relative scarcity of existing programs and increasing scientific evidence showing that physical activity breaks are essential to learning.

These decisions will have critical impacts on the health and productivity of young adults in America.

A full 60% of young adults are overweight or obese, according to a rigorous study published in the Journal of the American Medical Association.[57] Those young adults are more likely to develop health problems such as diabetes and high blood pressure.[58]

Excess weight has other consequences for young adults:

Obesity disqualifies 31% of all young adults from joining the military

Data from the Department of Defense shows that obesity would disqualify nearly one-third of all young Americans ages 17-24 from military service.[59] Once you add in problems like drug abuse and educational shortcomings, more than 70% of young adults in the U.S. would not qualify for service.[60] 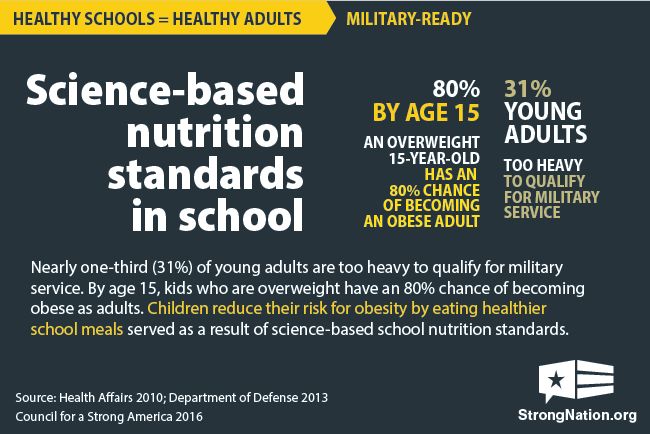 Obesity is also a problem among our current armed forces. The military saw a 61% rise in obesity from 2002 to 2011 among active-duty service members.[61] The military spends more than $1 billion annually in obesity-related healthcare costs.[62]

Obesity-related health problems amount to nearly $200 billion in healthcare costs in the U.S. each year, roughly one-third of which is footed by American businesses. That’s up to $6,000 extra per employee.[63]

Studies shows that healthier employees are more productive on the job, missing fewer days of work for health-related reasons than workers who are obese.[64]

What food parents serve at home, how active they are, and how well they model healthy behaviors impacts how healthy their children are.[65] Research shows that parents with unhealthy eating habits negatively influence their child’s eating habits, which can lead to excess weight gain.[66]

Childhood is the most crucial period for obesity prevention

Research shows that the risk for lifetime obesity is largely determined in the school-age years. By age 15, children who are overweight have an 80% chance of becoming obese as adults.[67]

Healthy eating and exercise during childhood dramatically reduce the risk of obesity. Yet many children in the U.S.—particularly those in lower- and middle-class families—have limited access to sports programs or safe places to exercise.[68] They also lack access to healthy food.[69]

Children who are active throughout adolescence are up to 13 times more likely to become active adults.[70] Mounting science also shows a direct relationship between physical activity breaks and kids’ performance in the classroom.[71] 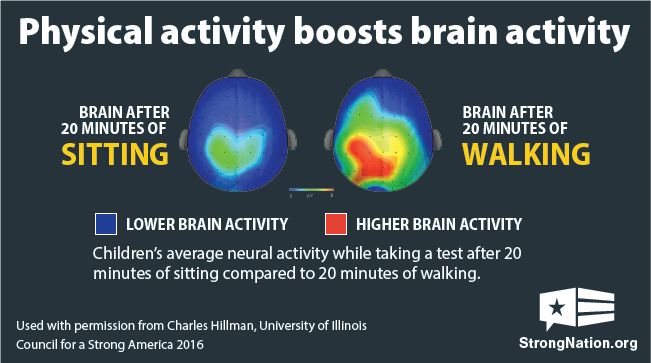 Yet physical activity in school has become increasingly rare over the past decade. According to a study from the Centers for Disease Control and Prevention, the percentage of schools that require students to take physical education declined from 96% in 2000 to 77% in 2014. The amount of scheduled recess has also declined.[72]

Physical activity and physical education gave me so much: focus, purpose, hope. Those elements helped turn a scared little boy into an accomplished athlete, a valedictorian, and the successful businessman I am today.

State-level decisions are contributing to this trend. Less than half of states have a dedicated funding stream for PE, and one survey found that the median annual funding for a school’s PE program is less than $800—leaving instructors with limited means to implement high-quality programming to engage and educate students.[73] Meanwhile, the number of states that require schools to provide physical education (PE) declined from 2010 to 2016. Only 8 states require elementary schools to provide daily recess.

As a result, surveys show that half of adolescents do not have any physical education (PE) in an average week.[74]

The decline in physical activity during the school day is a worrisome trend, given that such programs reduce the risk of excess weight gain. One rigorous study found that adolescents who participated in daily PE decreased their odds of becoming overweight adults by 30%.[75]

For decades, schools across America served chips, sodas, and other junk food to students.[76] Kids now have healthier food choices in school as a result of the Healthy, Hunger Free Kids Act of 2010—landmark, bipartisan legislation that directed the U.S. Department of Agriculture to update school nutrition guidelines to reflect the latest science.

As a result, millions of children are eating healthier meals and snacks and reducing their risk for obesity.[77] For example, one recent study found that students are consuming fewer calories at lunchtime. That’s an important outcome because, prior to the meal standards, high school students ate upwards of 1,000 calories at lunchtime, compared with an expert-recommended intake of roughly 800 calories per meal for a healthy adolescent.

The same study also showed an increase in the nutritional content of school lunch trays, finding that kids took in more calcium, among other nutrients.[78] This has particular implications for military readiness, because the military is facing an unprecedented rise in injuries associated with poor calcium in childhood.[79]

Setbacks in serving healthier school meals have been addressed

In the years since, schools faced problems developing healthy foods that kids wanted to eat, with limited resources and outdated kitchens that were not equipped to prepare meals from scratch. There were also claims of increased “plate waste”, despite studies showing otherwise.[80]

To address those implementation hurdles, the USDA made modest changes to allow appropriate flexibility around some of the more challenging requirements. Congress also appropriated funding to provide competitive grants that schools can use to update cafeteria equipment and facilities as well as obtain additional training for school food professionals.

Recent research has shown dramatic improvements in school meals since the updated standards were put in place. Student participation in the lunch program is stable, surveys show that students, parents, and school leaders like the new meals, and more than 98% of schools nationwide are meeting the nutrition guidelines.[81]

WHAT LAWMAKERS CAN DO:

The latest authorization of the Child Nutrition Act expired on September 30, 2015. Congress should take action to provide greater assistance to schools and uphold the healthier school nutrition standards going forward.

In January 2016, Senators Pat Roberts (R-KS) and Debbie Stabenow (D-MI) introduced a bipartisan Child Nutrition Reauthorization (CNR) that was unanimously passed by the Senate Agriculture Committee and includes a compromise to provide schools with targeted flexibility while maintaining the integrity of the science-based nutrition standards currently in place. The Senate proposal is supported by a broad coalition of groups ranging from school food service professionals to retired military leaders.

Nine out of 10 Americans support increasing the amount of PE in schools.[84] More states should follow suit and increase physical activity opportunities in schools. Doing so will help youth perform better in the classroom, and reduce their risk of obesity.

Excess weight is a problem for 60% of young adults in America, affecting their workforce productivity, ability to raise healthy families, and their chance of qualifying for military service.

Policymakers at the national, state, and local levels can help prevent obesity by maintaining healthy food choices and opportunities for physical activity in schools. In doing so, they will help children adopt healthy habits that prepare them to make positive contributions to our country.

A few weeks of boot camp cannot make up for a lifetime of poor eating and exercise habits. Good nutrition starts at home, but many kids get up to half of their daily calories at school so it just makes sense to ensure they are eating healthy foods there, too.